We may share their Queen and their language, but aside from that we have very little in common with our friends in the UK. Probably one of the most distinct difference is our opposing holiday culture. Having near-enough good weather all year round means that the novelty of Australian beaches can quickly wear off (as much as we love them!). However, in England, the coastal resort is celebrated all year round regardless of weather. It is a staple of British culture, the classic ‘seaside holiday’. Plus, many British nationals are still feeling the effects of the last financial recession. Therefore a lot of people are choosing ‘staycations’ over foreign holidays. So what is it about the quintessential English seaside resort that still draws so many people today?

England has many seaside resorts across the full length of the country, and many in Scotland and Wales too. North Yorkshire plays host to the civil parish of Bridlington, or you can head down south to Weymouth on the Dorset coast. Wales showcases some beautiful beaches and Southend-On-Sea in Essex is only an hour away from the centre of London. You’re not at all bound by location, and you could even visit a number of places over a two or three week period.

Britain is very different in 2016 than it was during the 50s. Affordable air travel didn’t really hit Britain until the 1990s. Plus, long journeys abroad by ferry certainly weren’t for everyone. So, it made sense to head to a beach resort for some good, traditional British fun. Nowadays, we have so many more options available to us in terms of where in the world we can holiday. But the nostalgia of days gone by does still seem to attract many British people back to their coastal towns. If you are looking for a quintessential British holiday then a coastal break could be perfect for you. You have the added benefit of avoiding the hustle and bustle of large cities like London, and of course, nothing rejuvenates you like the sea air!

Whether you want to rent out a private cottage or if you’re happy with a Bed and Breakfast, there are plenty of cheap places to stay on the British coast. Enjoy some traditional hospitality at a B&B, most of which provide a choice of a continental or a cooked breakfast – and of course, plenty of tea! Cottages are best if you are in a large group or if you would like a little more privacy. Many feature stunning views across bays or cliffs.

There are some things you just can’t miss when visiting a British seaside resort – after all, it’s what makes it such a staple of British culture! Take a look at our top picks and see how many you can tick off your checklist on your visit…

This might seem a little (ok, very!) odd at first. But donkeys on the beach have been a firm fixture at seaside resorts in the UK since 1886, when they were first introduced at Weston-Super-Mare. They are a Victorian tradition and you can catch beach donkeys on English beaches during the summer season and also school holidays. Children can ride the donkeys, who are led by an expert in a group, up and down the beach for a small fee (usually £1 or £2). Most of the donkeys wear traditional Victorian style bridles with their names on, so your little one can get to know their donkey personally. If you’re spending the whole day on the beach, make sure you are fully prepared for the elements. Plenty of towels, shade and a windbreak (it’s England after all!) are advised.

Puppet shows are commonplace at British seaside towns, the most famous of which is pantomime-style play ‘Punch & Judy‘. Famous diarist Samuel Pepys was the first to note the arrival of this comedy classic, when he saw an Italian puppeteer performing a show in Covent Garden. The date recorded on this diary entry is 1662, making Punch & Judy over 350 years old. The premise of the show is usually based around Mr Punch being involved in some kind of physical altercation – which he always wins! For this reason, it is one of the earliest examples of dark comedy – however, it is still suitable for children. The show is split into short, separate acts each performed by one puppeteer, who also provides the voices for the characters. Mr Punch and his wife Judy truly made their home in England in the 18th century and continue to shock and delight audiences right up to this day.

Seaside resorts are nothing if not full of delights. Indulge in some thrill-seeking with rollercoasters situated on the shore, or go and watch a show.  Many resorts have hundreds of entertainment options, and you can find what is right for you by visiting websites such as www.blackpoolpleasurebeach.com. Penny-amusements are also a popular tradition. Get your money changed into copper 1 and 2 penny coins and go for a fun afternoon at the amusement arcade. Children can enjoy friendly competitiveness for the sake of a few pennies and can win some pretty garish toys. It’s a world away from the video-game ridden arcades we now know of, but really, that’s all part of its charm. 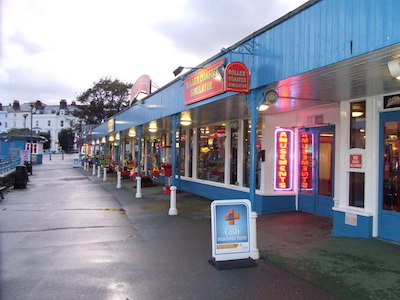 Now, British seaside resorts aren’t exactly known for their high class cuisine. Despite the modernisation of a few of these towns, hip new restaurants are still few and far between. However, that doesn’t mean to say there’s no quality to be found. The Magpie Cafe in the North Yorkshire town of Whitby is rarely seen without a queue at its door. What does it serve? The humble fish and chips. No British seaside holiday is complete without a hefty portion of this classic dish. How authentic you want to get depends on whether you opt for a ketchup accompaniment or the traditional salt and vinegar. If all that salt is leaving you with a craving for something sweet, pick up a stick of rock on your way back to your cottage. It’s sure to keep the kids occupied too!

Hi, I'm Anna the Editor of Beauty and Lace. This website was my first baby and since its launch, I've gained two kids (plus one on the way), a husband and a puppy!

What You Are Looking For?