This little tidbit landed in the Beauty and Lace inbox today, and we thought it would be worth sharing. It’s official, the Power Balance bands that everyone is wearing just aren’t worth the cashola.

Oh and if someone calls you a bogan, take it as a compliment, there is a little bit of bogan in all of us…COME ON!:

In yet another case of evil corporate arch-villains scamming decent, honest bogans, the Australian Competition and Consumer Commission yesterday declared the Power Balance band product to be a scam.

While Choice Australia triumphantly unmasked this rort in October, your good friends at Things Bogans Like had identified this bogan fad back in April.

“In its unending quest to be as maxtreme as possible, there is no gimmick too improbable, no shortcut too astounding, and no celebrity endorsement too smarmy for the bogan. This fact has sustained marketers for years, who appear to make substantial secret wagers with each other about who can devise the most ridiculous bogan fitness fad.” (http://thingsboganslike.com/2010/04/19/129-power-balance-bands)

The Power Balance wrist band was received eagerly by the bogan as the ultimate way to become maxtreme. The latex wristband featured exciting holograms, and exciting claims about how the holograms would harness the bogan’s “bio-field energy”, promising up to “500% more power, flexibility, and strength”.

Once leading public intellectuals such as Brendan Fevola and Benji Marshall were spotted wearing a Bogan Balance band, the bogan sprinted down to its local sporting emporium and parted with the requisite $60.

But now, the bogan dream lies in ruins, with ACCC boss Graeme Samuel declaring “Power Balance has admitted that there is no credible scientific basis for the claims and therefore no reasonable grounds for making representations about the benefits of the product”. 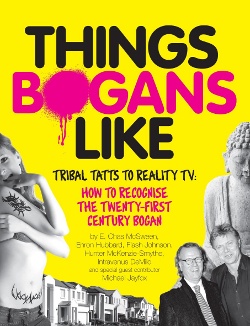 Not only does the bogan not possess any additional power or balance, its credit card remains unbalanced by the $60 cost, along with the $150 spent on an additional sheet of 10 hologram stickers. And it turns out that the ACCC had the power, not the bogan.

Fortunately the ACCC has granted the bogan the right to return its magic maxtreme hologram bracelet for a full refund, but the bogan’s ego is likely to prevent this offer from being taken up.

So while yet another TBL-anointed bogan cash pillaging scheme bites the dust this week, the larger truth cannot be overlooked. The bogan will learn nothing from this episode, and is certain to embrace the next pseudo-scientific max awesome shortcut with the fervour of a single mother at a stockbroker’s Christmas party. We will be waiting.

THINGS BOGANS LIKE, published by Hachette Australia and in store now. RRP $24.99.

Beauty and Lace is an online magazine for women. We hope you enjoyed this article!

One thought on “Power Balance Bands a Scam”